In Reply to a Beloved Brother Regarding the Kavanaugh SCOTUS Nomination

by Darrell B. Harrison | 7 comments 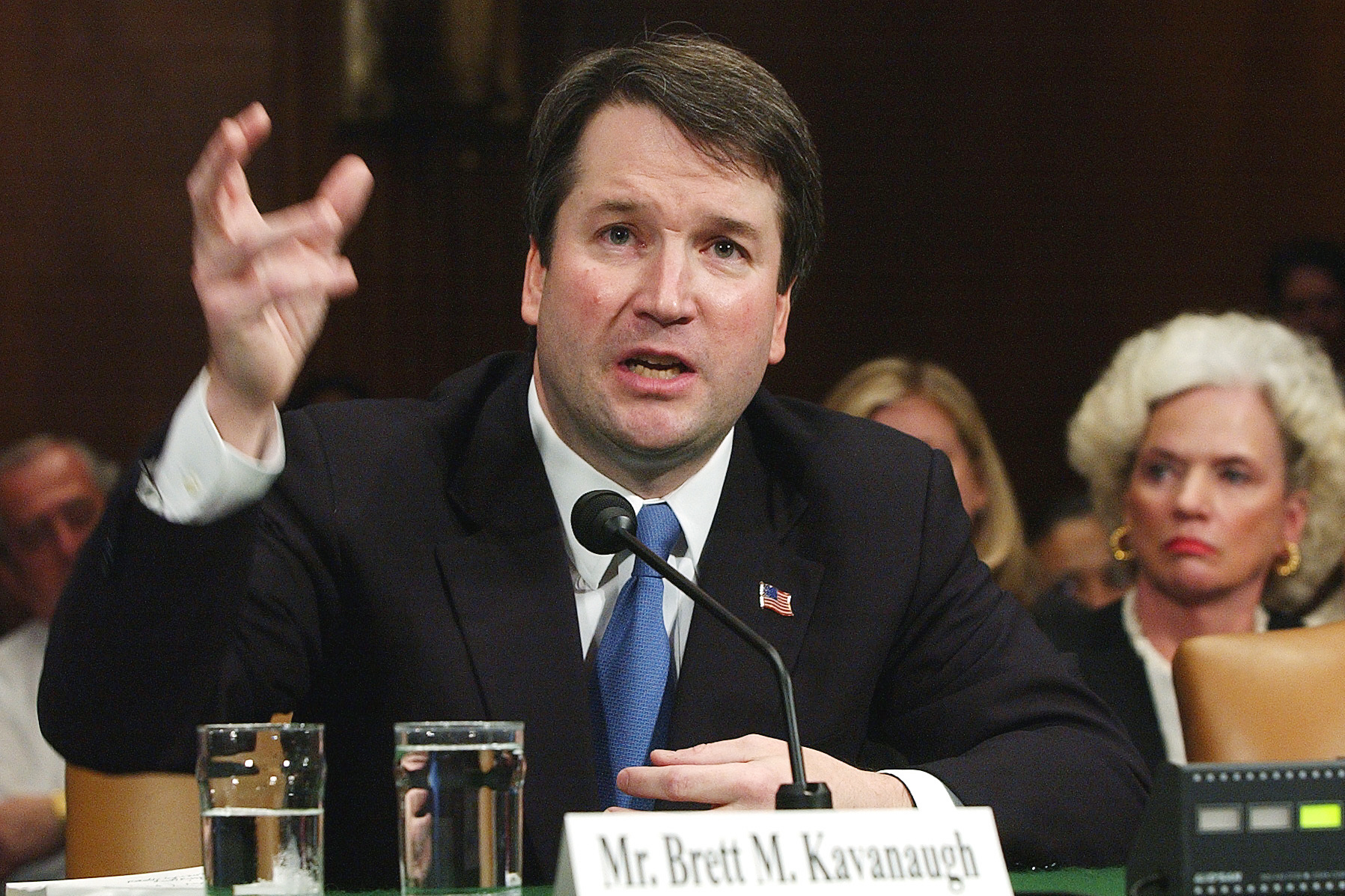 I recently came across an article on Christianity Today by John C. Richards, Jr., a self-described “Christian person of color”, entitled ‘Brett Kavanaugh Is a Troubling Supreme Court Pick For Black Christians‘. As the article’s title suggests, Richards is expressing concern over the potential impacts the nomination of Judge Brett Kavanaugh to the United States Supreme Court by President Donald J. Trump might have on black Christians in America. The commentary was penned as a reply by Richards to an article written by Dr. Ed Stetzer in support of the Kavanaugh nomination.

Richards, who, according to his article, has partnered with Stetzer in ministry in recent years, begins his commentary by graciously acknowledging Stetzer’s work on issues Richards opines “many evangelicals avoid” (such as the #MeToo movement, immigration, and mass incarceration). So the reply by Richards to Stetzer is not borne out of any spirit of acerbity or malevolence, but of Christlike grace and respect, which is why I refer to Richards’ commentary as a reply and not a response, as the latter seems to me to imply a more adversarial tone of delivery which, as I see it, is neither the case nor the intent here.

Nevertheless, I do find the timing of Richards’ concerns interesting, if not ironic. I say that in the sense that his dissatisfaction with Kavanaugh’s nomination seems to be proffered in such a way as to suggest that black Christians are, or should be, primarily, if not solely, concerned about matters that subjectively fall under the ever-expanding and ambiguous banner of “social justice”.

In processing many of the concerns raised by Richards about Kavanaugh, I was reminded that there remains within the evangelical church remnants of a long-held stereotype that the ‘Christianity’ of black Christians is distinct from that of white Christians in terms of their political and missiological orthopraxy. That is, that black Christians are to invest themselves only in the work of improving the socio-economic station of those who would be considered “disenfranchised” –  systemically or institutionally – particularly with regard to employment, housing, and educational opportunities, whereas white Christians are to align themselves with issues like abortion which, confoundingly to me, is not usually categorized as a “justice issue” by those who claim to be advocates and champions of social justice.

It may surprise many to learn that, not unlike their white evangelical brothers and sisters, black Christians can actually walk and chew gum at the same time. Despite the narrative that is often put forth that portrays black people as monolithic in essentially every aspect of their existence as human beings, black Christians are quite a diverse lot in terms of the social, political, and cultural issues that are of importance and significance to them.

Not only do black Christians care about matters of biblical justice (Lev. 19:15-18) – a term which, I believe, is more accurate than social justice in objectively contextualizing the paradigm to which professing Christians should subscribe concerning the equitable treatment of others who, like themselves, are created in the image of God (Gen. 1:27, 5:1-2) – they care about other issues as well, such as taxes, school choice, terrorism, and the economy. It is in light of these myriad issues that black Christians fully comprehend that Kavanaugh has been chosen by President Trump to fill the role of Associate Justice of the Supreme Court, not Social Justice of the Supreme Court. Given that Richards is an attorney and I am not, I need not remind him that President Barack Obama was afforded the opportunity to nominate not one but three individuals to the Supreme Court during his eight-year tenure in office: Judge Sonia Sotomayor (2009), Judge Elena Kagan (2010), and Judge Merrick B. Garland (2016), of whom only Sotomayor and Kagan were confirmed.

In 2015, both Justices Sotomayor and Kagan sided with the 5-4 majority opinion in Obergefell v. Hodges, the case that legalized “same-sex marriage” in America. And yet I recall reading no such cautions as Richards’s when Sotomayor and Kagan, neither of whom would be regarded as ideologically conservative, were nominated by President Obama. Which is increasingly curious to me given that Obama openly advocated and advanced a domestic and global social policy of same-sex marriage and abortion-on-demand – including partial-birth abortion – positions that are unarguably and overtly unbiblical.

I point this out because to black Christians, the audience on whose behalf Richards appears primarily to be speaking, issues such as abortion and same-sex marriage should weigh just as heavily as the maltreatment of minorities by police officers, of immigrants who are legitimately in need, or the sexual abuse and exploitation of women and children (Ps. 72:4; 82:3-4; Matt. 25:35-40; 7:12). This is especially true when one considers that both homosexuality and the murder of the unborn are no less a violation of God’s precepts and commands as the other issues I mentioned (Lev. 18:22, 20:13a; 1 Cor. 6:9; 1 Tim. 1:10; Ps. 139:13-16; Prov. 31:8-9).

In discussing the potential impact of a Kavanaugh nomination on black Christians, we must not feign ignorance of the fact that Democrat and Republican presidents alike, especially in recent decades, have leveraged the authority granted them under the Appointments Clause of the U.S. Constitution to appoint men and women to the Supreme Court in an effort to, for better or worse, embed their personal worldview into law and thus affect the philosophical and ideological direction of this country in perpetuity (as Supreme Court appointments are for life). Given this reality, it would be naive, to say the least, to deny that President Obama had in view the legalization of same-sex marriage when he nominated both Kagan and Sotomayor to the Supreme Court. Likewise, I am not oblivious to the possibility that President Trump has his sights set on leveraging a Kavanaugh appointment to overturn Roe. V. Wade which, in 1973, legalized abortion under the 14th Amendment.

But Richards’ commentary about Judge Kavanaugh is not limited to how he may or may not benefit black Christians as a Supreme Court justice, but that President Trump nominated him at all.

Richards contends that “…the President missed the opportunity to change the narrative of a court dominated by white male appointments” while augmenting his assertion with a CNN article pointing out that in the history of the Supreme Court, all but six justices have been white males. Be that as it may, I remain dogmatic in the view that black Christians should resist the urge to view the appointment of Brett Kavanaugh as a matter of social justice (Prov. 24:23; Acts 10:34; Rom. 2:11; Jas. 2:1, 2:9), as if such characteristics as gender and ethnicity are factors that would inherently be of some collective political or legislative benefit to them.

Toward the close of his commentary, Richards asks his readers to consider, “Who is missing from the table?” It is a question that is steeped in social justice inclusivism, as it is posited against the backdrop of what Richards describes as successes he and Stetzer have had in building “a diverse team of thought leaders that I’m proud to call colleagues.”

And while I have the utmost respect and appreciation for such a collaborative effort among brothers who are of different ethnic and, perhaps, cultural persuasions, the truth is the Supreme Court is not – and has never been – an extension of the evangelical church (a lesson which, in the wake of the Obergefell v. Hodges and Affordable Care Act decisions, one would think we evangelicals would have learned by now). As such, professing Christians should not expect the Court, as a secular judicial body, to be structured in such a way as to be comparable to forming an ethnically diverse group of evangelical thought-leaders.

Notwithstanding the sense of “tempered celebration” acknowledged by Richards in his article, black Christians need not fear that the confirmation of Judge Brett Kavanaugh to the Supreme Court will result in the Court taking on the ethnically discriminatory tenor of the pro-slavery justices who rendered the 7-2 Scott v. Sanford decision in 1857. As the late historian and author Don E. Fehrenbacher writes in Slavery, Law, & Politics: The Dred Scott Case in Historical Perspective, “Dred Scott v. Sanford has been called ‘the most frequently overturned decision in history.’ The Supreme Court decisions of the late nineteenth century that contributed to the support of institutionalized racism were neither justified in racial terms nor primarily motivated by racial considerations.”

“Christians who can no longer listen to one another will soon no longer be listening to God either.” – Dietrich Bonhoeffer

Any assumptions that Judge Brett Kavanaugh’s confirmation to the United States Supreme Court would be judicially, legislatively, or politically detrimental to black Christians are, in my humble opinion, unfounded and unwarranted. As I stated earlier, black Christians are not a monolithic group of people who view every social issue through the same ideological prism – the commentary you are reading is evidence of that – nor should we collectively be expected to be of a singular ideo-political mind on such issues simply because we are black and Christian.

As followers of Christ, who live each day as individual testimonies of His unmerited grace and mercy (Eph. 2:8-9; Heb. 12:1; 1 Pet. 2:5), we should never allow our personal perspectives and opinions on such issues as those that confront the evangelical church today to produce within us a degree of animus that partitions us along ethnic and cultural lines. Or, as Booker T. Washingon exhorted many of his contemporaries who disagreed with him philosophically, “We should not permit our grievances to overshadow our opportunities.”

After all, are we, as Christians who are black, not Christians first?

The American system of jurisprudence, though in many ways constructed on biblical concepts and principles, is not inherently ecclesial or theonomic in its function. Nonetheless, God’s Word speaks objectively and universally to every issue that is of concern to both His church and His world for both are His (Ps. 24:1; Jn. 1:3; Acts 17:24a; Eph. 1:22; Col. 1:18). In the end, when all has been said and done, it is the immutable truth of the Word of God that unites us to one another, not the judicial decisions of nine individuals appointed by politicians (Eph. 4:1-6; Col. 3:13-14).

As believers in the one true God (Jn. 17:3a), who reigns not only over Washington, D.C. but over all of heaven and earth (Ps. 103:19), we can rest assured that regardless of how the Supreme Court carries out its mission, the foreordained purposes of an omnipotent, sovereign, and omniscient God will ultimately and eternally be accomplished for His glory and our sanctification (Prov. 21:1; Jer. 1:12; Rom. 8:28).