The Shaping of My Conservatism 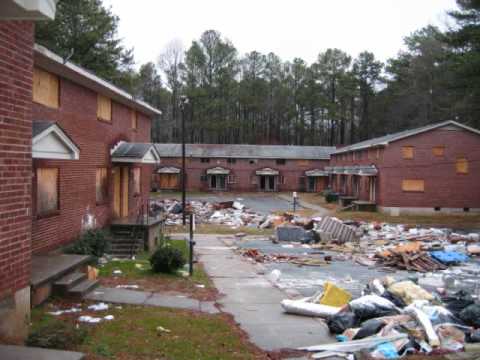 (Pictured above: Dixie Hills housing projects on the west side of Atlanta where I grew up.)

There is a great misnomer among black liberals that black conservatives, simply because they are conservative, all come from privileged, well-to-do backgrounds and, as such, desire to be rich and white in order to be “accepted” into the Republican party.

I grew up in the housing projects of Dixie Hills in inner-city Atlanta in an apartment where my mother and father were both alcoholics. Growing up, I never lived in a house. Every address my family lived at was an apartment number.

I literally hated weekends, because it was on Friday and Saturday nights that my parents would invite their co-workers over and they would play cards and drink all night long to the loud and incessant refrains of Al Green and the O’Jays. To this day, I still loathe the sight of that green Bacardi Rum bottle. Being the middle child, it was I who would normally play the role of peacemaker in breaking up the physical altercations my parents would regularly get into with one another after having had too much to drink. Many nights I would never get to sleep from hearing them argue until they both would finally fall asleep.

As a child, I never had my own bedroom, but shared a small one with my now late-older brother until I was 18 and entered the military after graduating high school. I can still recall the images and sounds in my mind of the mice and rats that would walk along the tops of the trash cans in our back yard. When I was 9-years old, I literally cried while standing in front of my parents as they told me I’d be getting a bicycle for Christmas. They were tears of happiness, of course, but also of sadness as I knew my parents couldn’t afford it because as a child I had never had any possessions of my own to begin with. During my sophomore and junior years of high school, I worked summers with my father, waking up at 5:00 in the morning and taking two buses (my family never owned a car) to get to work by 7:00 at a warehouse sweeping floors, stacking pallets and breaking down cardboard boxes.

I was once robbed at gunpoint, along with others, by a black male while sitting in a barber shop on the south side of Atlanta (College Park) while waiting to get a haircut. My brother died of HIV-AIDS at the age of 34, and my father of a massive heart attack at 64 while using the bathroom at home. My mother, who’d gotten off work that day to find that my father wasn’t there to pick her up like usual, walked home from work to find him slumped over the bathtub. My father’s death taught me in very real terms that regardless where you are or what you’re doing, when the appointed time arrives for God to call you into His presence, you are going to go. Period. No discussion. No negotiations.

For nearly four decades, my mother worked as a cafeteria cook in the Atlanta Public School system, and today her knees still bear the scars of standing on her feet for hours on end for so many years. Oftentimes, she would have to bring home leftover food from what was served at school so that we could have something to eat. My father left me his work ethic. My mother taught me about Jesus Christ and of the importance of going to church. It is because of them that I ascribe to principles of hard work, personal responsibility and a strong Christian worldview.

I don’t say any of this to exalt myself above anyone or to engender pity. Those who know me personally – in real life – know I would never do such a thing and that I fully accept the path of life upon which God has graciously and mercifully brought me. However, as a conservative who is black, I am often confronted by black liberals with the assumption that people like me, who happen to espouse a socially and fiscally conservative ideology, have absolutely no clue what it means to have suffered in life or to done without materially; that I’ve always “had it made”; that I’ve always had a good job, driven a nice car and lived in the suburbs with all my needs met. For those who think that way, I doubt that any of what I’ve said here will change their minds, but that’s not the intent of this commentary anyway.

The point I’m making here is that my being conservative (socially and fiscally) is the direct result of life-lessons taught to me growing up in the projects of Dixie Hills, not out of some warped, insecure desire to be accepted by a particular person or group. In fact, most conservative blacks I know have backgrounds and experiences similar to my own in that there was no “silver spoon” or wealthy benefactor on whom they could rely to make life more comfortable for them. But even if there were, it shouldn’t be held against them that it somehow disqualifies them from being able to relate to the so-called “black experience” (whatever that means), as if being brought up in material poverty is the requisite “street cred” one needs in order to be considered “truly” black.

God bless my fellow black conservatives who cannot relate to what I’ve had to go through and experience. God bless them! That there should be such an ethnic litmus test as a black person being deemed “genuinely black” because of what he or she has had to do without in life is absurd to begin with! That so many black liberals consistently view abjection and pauperism as badges of honor is puzzling to me. In their minds it’s okay for a black person to “make it” in life, just don’t make it so well that you “forget where you came from” or we’ll “take away your blackness card”.

I thank my mother and father, as imperfect as they were, for instilling within me the ideals that faith in the God of the Bible and perseverance through Him are what really matter in life, and that where I come from isn’t nearly as important as where I’m headed.